The Battle of the Bee 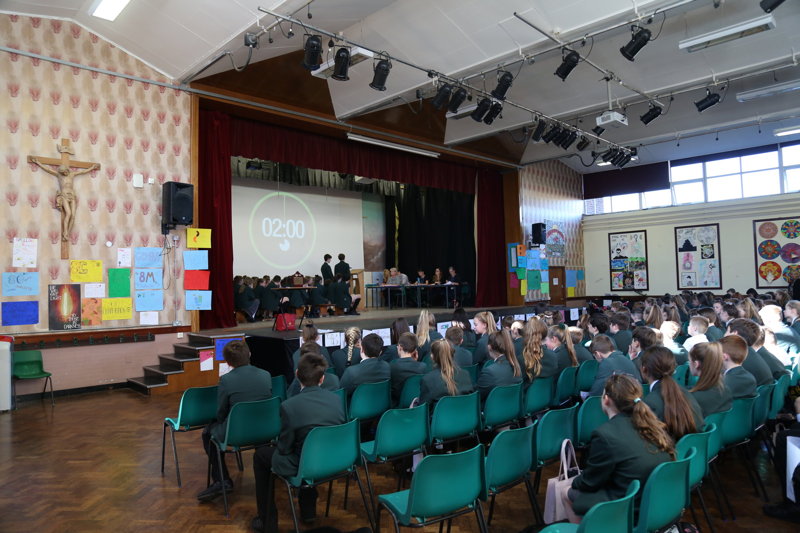 Eddie’s annual Year 8 Spelling Bee was fiercely contested on Thursday 18th October 2018 and saw the usual high standard of super spellers taking to the mic. to try and win glory for their houses. The buzz about the Spelling Bee began several months ago when Year 8 form tutors and English teachers trained their classes in how to participate in the competition and started to select representatives for their forms. A semi-final took place earlier on Tuesday to identify Year 8’s spelling elite in terms of the best form, as did most of the Last Speller Standing Competition. However, the final minutes of the Last Speller Standing took place on stage in front of Year 8, so that all could see the orthographical abilities of the best Bee participants. Robert and Radaslaw slugged it out over words such as accessible, anxious and believed. After a fierce but fair fight, Robert emerged as Last Speller Standing from the 249, Year 8 pupils who began the competition process. Well done Robert – Champion Year 8 Speller 2018!

And then it was on with the Inter-house Bee. Mrs Taylor gave her usual advice to competitors and the competition began. Teams had selected the level of difficulty of their words, electing either to rattle through as many easy words as they could, or opting for trickier words with the possibility of getting fewer right but earning them more points. Would tactics come into play? Mrs Taylor dispensed dictionary delights such as ‘antique’ and ‘metaphor’ and everyone did their best with Clitherow house emerging clear victors gaining 84 points. Clitherow’s conquering team consisted of Shani, Radaslaw, Bobbie and Ruby and they were deemed very worthy winners, beating their nearest rivals by 18 points.

The cheers were deafening. Mr Dumican awarded the well-earned medals and it was time for our tired word warriors to go home.

by Mrs Payne, Head of English