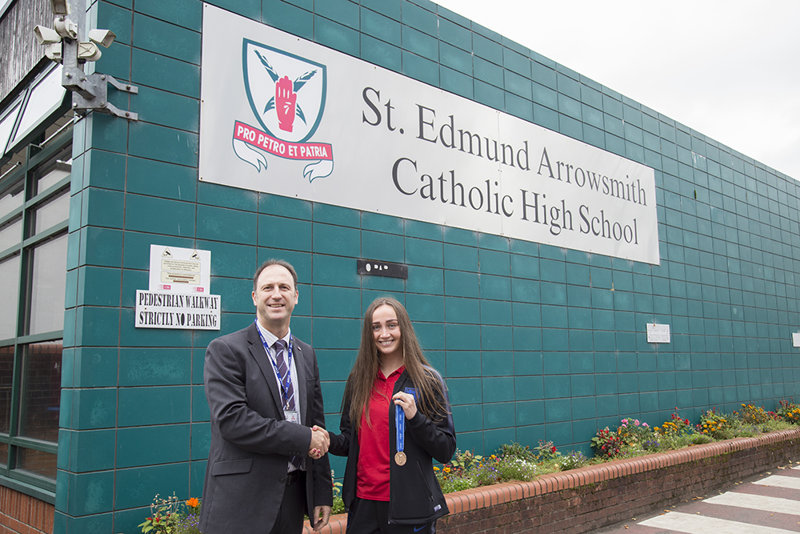 The FIFA under 20’s Women’s World Cup took place this summer in France.  Our former Head Girl (2014), Megan Finnigan, played for England in this very prestigious tournament and came away with a FIFA World Cup bronze medal!  Megan played fantastically well in all the games, helping England beat North Korea 3-1, draw with Brazil 1-1, beat Mexico 6-1 and the Netherlands 2-1 which put them in the semi-final against Japan.  Despite everyone playing really well and giving everything they had, England unfortunately lost 2-0.  This meant that England had to play the host nation, France, in a 3rdplace play-off game.  England took the lead at the start of the second half but France equalised late in the game which meant it went to penalties, which England won 4-2.

I watched all the games on Eurosport at the end of the summer holiday and cannot express how proud I was of Megan and her amazing achievement, I found myself shouting at the television a lot! By a stroke of luck, Mrs Cole attended one of the games with the friends she was on holiday with, and managed to have this picture taken with her at the end of the game with North Korea!  I am very grateful that Megan took time out of her hectic playing and training schedule with Everton Ladies to call into school with her bronze medal.  Megan was an amazing head girl and a brilliant pupil for the five years she was with us and we are all delighted she is being so successful.   I personally couldn’t be happier for Megan as she contributed massively to the school when she was a pupil here: she was always well-mannered, kind, respectful and gave 100% effort to all aspects of school life and everyone in the school wishes her every success in the future.