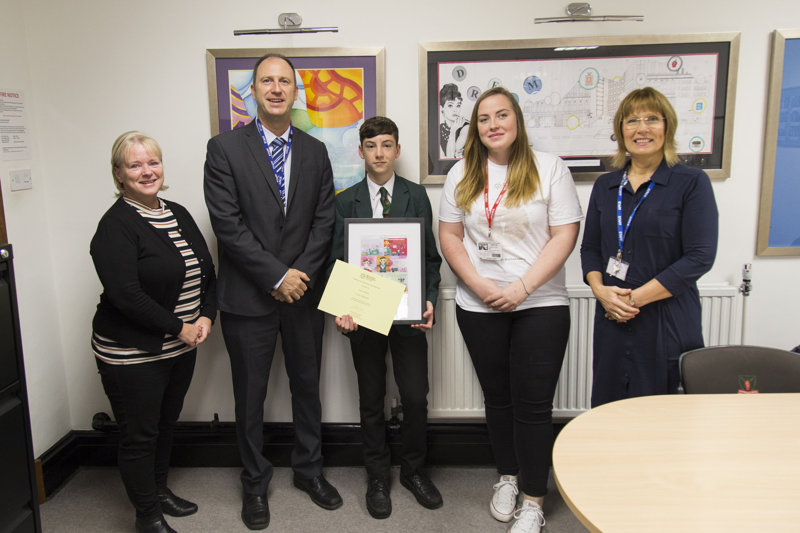 ‘Only I Know’ is the title of the comic I wrote for the Manchester Metropolitan University Comic Smart competition that I entered towards the end of year 9. Elizabeth Pilling MMU student ambassador, featured in the pictures, delivered the workshop as part of the Make a Difference Ambassador scheme. Claudia Conerney, Schools Liaison Coordinator, devised the project, which has run since 2012. Mrs Taylor (our recently retired school librarian) ran the group and we used to meet in the library for sessions after school. The winner’s prize was to have their cartoon professionally designed by a graphic designer. Joseph Albin-Clarke (MMU student ambassador) designed mine which you can see in the picture below. In the story, I was one of the characters in the world of the comic and I got elastic powers from a mysterious meteor.  I plan to save the world by using my stretching powers to stretch back in time. I got the idea of my character from my initials – EM.  This made me think of an elastic machine and eventually this became Elastro.

I plan on taking my idea further by making more episodes and stretching (no pun intended!) this story to a full universe of comics. My idea is that this universe could be an educational and enjoyable comic for parents to buy for their young children. Another idea for Elastro is for him to lose his powers and eat spaghetti which makes him get his elastic powers back.