Class of 2018's Celebration of Success 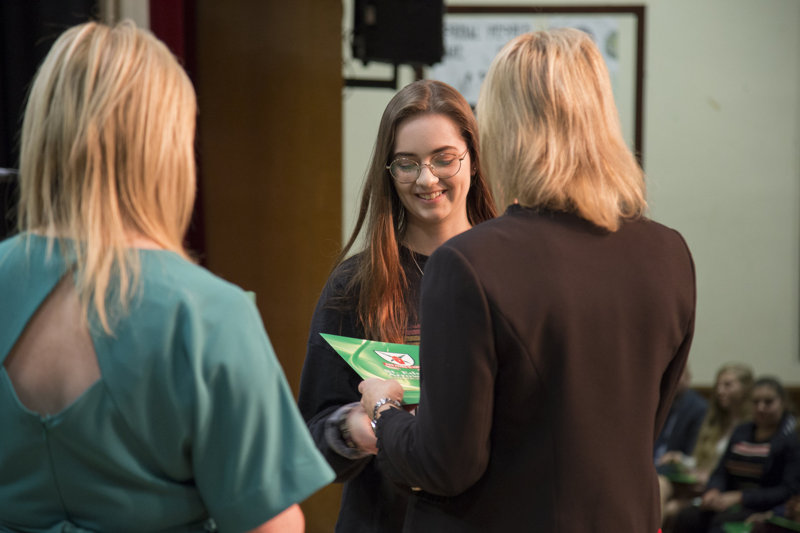 On 8th November, the former Year 11 students who left school last year gathered together for the annual certificate evening, to collect the certificates they had earned for recognition of their amazing efforts in their GCSEs. This evening was the last time they will be collectively together at St Edmund Arrowsmith as a whole year group. It was a wonderful evening for former pupils to see their former teachers and those who they hadn’t seen for a while.

Once the former pupils were seated amongst members of their form groups, many exchanged smiles with one another. The presentation began with a performance from the Year 7 choir, which instantly set a celebratory mood for pupils to reflect upon all their successes and achievements earlier this year. When the choir concluded their incredible performance, the hugely anticipated presentation of certificates began. Each pupil was welcomed as they came forward to collect their certificates, with a congratulatory handshake from this year’s guest of honour, Collette Roche, as well as their Head of Year, Mrs Doolan. Once the distribution of certificates had come to a close, Collette, a past pupil of St Edmund Arrowsmith, one of Vogue’s Top 25 Women in the United Kingdom, and who was most recently appointed Chief Operating Officer for Manchester United, made a speech. This appointment makes Collette the most senior female figure in the history of the football club! “Goals aren’t good to have, they’re essential”, was one of the many thought-provoking comments Collette made. This reminds us to always have goals for the future, no matter how high and unachievable they may seem. She also told us that if she was their age and was told that she would go on to holding positions such as Chief of Staff and Acting Managing Director for Manchester Airports group, she probably wouldn’t quite believe it. She added, “Reach for the stars and keep your feet firmly on the ground.” Her inspirational words have undoubtedly impacted the future for many past pupils’ lives. It felt such a great honour to have such an influential person able to attend the certificate evening.

When Collette had concluded her eloquent and meaningful speech, Head Boy Joe and Head Girl Yasmin offered their words of appreciation on behalf of their year group, as well as sharing anecdotes about their time in school. The speech concluded by wishing good luck to everyone. Mr Dumican delivered the final speech with ‘his favourite prayer of all time’ ‘Do it anyway’, written by Mother Teresa. Following the touching ending, everyone made their way into the hall for refreshments to celebrate and reflect upon their superb achievements.

The presentation was a thoroughly enjoyable evening and I was delighted to have been present. It is difficult to comprehend that I will soon be sat among members of my year group in a presentation evening just like this; it is both terrifying and exciting! Knowing of the many successful pupils who received their certificates with great pride on this evening reminds me that all my hard work during this next academic will definitely pay off.

By Natalie Howarth, 11B2