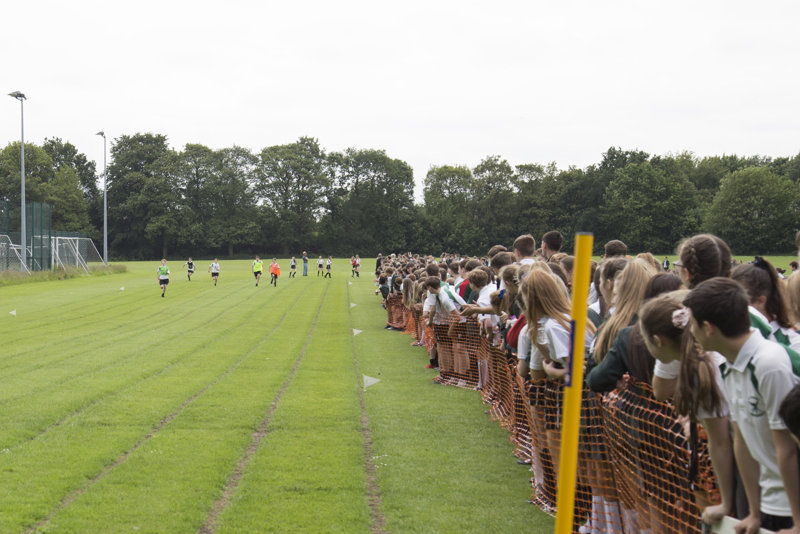 A false start to our annual sports day the day before due to the great British weather, saw the competitors raring to go on a cloudy but muggy afternoon. Following an ice cream from the always-busy ice cream van, we let our roving reporters off the leash to record the highlights of the day. This is what they had to say: Signalling the start of this year’s Sports Day was the Year 7 Mixed Relay. Sprinting across the finish line first was George Conway from Southwell, with a record time of 1.01.34. He was miles ahead of everyone else and managed to break the record previously held by Almond in 2014, (1.02.55) by one very important second!

There was a big field for the girls 800m, with four girls from each form competing. Caitlin Maylor from Southwell was a good 75m ahead of everyone else as she crossed the finish line with a time of 3.01.81; an impressive win! I caught up with her just after the race and she still found the breath to tell me, “It feels good to win,” but was so exhausted after this that she couldn’t say utter another word. Keira Mullins became Cinderella in the first lap, losing her trainer! However, she carried on going and was presented with it in true Prince Charming style by Mr Bradley when the race had finished.

The 100m girls race was very close, but only just winning was Caitlin Curtis from Southwell, who fell over with the exertion as she crossed the finish line.

The 200m boys had two runners neck-and-neck as they came around the bend. However, Harry Millington-Matthews from Barlow pushed on and won with an excellent time of 29.31.

Barlow crossed the line first in the 4x100m girls relay, with a time of 1.07.10. Ward came last in this race, but unfortunately only had three people in their team, but in typical Eddie’s true sportsmanship, one person ran 200m! Massive well done for still finishing with a good time.

The other results were:

The highlight of Sports Day every year for me is Mr Killen’s witty commentating. However, this year he was also joined by the lovely Mrs Payne. As always, the crowds were entertained with funny jokes and informative results. Mr Killen joked that we were probably safe as Mr Morgan hadn’t killed anyone with the starting pistol in the last few years and Mrs Payne announced what races the teachers used to run when they were at school. Teachers? Running? Now that’s a thought!

I also interviewed Mrs Lomiiko, who is retiring from our school this year. She said “I am very, very proud of my form. I have thoroughly enjoyed my time at this school and am going to miss everyone. I will definitely come back next year to watch sports day again.”

Overall, in Year 7, in joint third place was Howard and Mayne, in second place was Ward and the winners were… SOUTHWELL! Congratulations to everybody in 7S. 8W were the winners of the mixed relay, despite being closely followed by two other competitors. They did this is 58 seconds, amazingly only half a second off the school record.

Next came the 800m girls race, which Olivia Birch from 8M won, even after stopping after the first lap to fix her sock!

The final race was the boys relay, which was extremely close but won by Thomas Holland from 8O, a mere two seconds from the school record!

The final standings for Year 8 were as follows; There was a great start to the day for Year 9 in this year’s sports day, as in the first race, the mixed relay, a record was broken! This was a very tense race, as on the final leg of the race, Ward were ahead but very closely followed by Lawrence all the way through. It was a photo finish which ended up with Ward winning the race and breaking the old record of 54.7 seconds. They ran in at 53.84 seconds; what a great way to start the afternoon. The next race was the boys 800m which was very intense. After the first lap, it was anybody’s game with all of the competitors fighting for first place. Once the boys reached the last 20m of the race, Matthew Haynes, 9O was in 3rd place but right at the last second he managed to find a burst of energy and overtook 2nd place. Sonny Williams in 9W came first and Matthew Haynes, 9O came 2nd. Matthew said after the race he felt, “very sneaky” when overtaking the 2nd place runner!

The girls 100m race followed, Abbie Critchley, 9W was way out ahead of all her competitors and managed to take 1st place, earning even more points for Ward. Following this was the boys 100m - this race was definitely one to watch! Luke Flannery, 9C powered over the line with a very impressive 11.66 seconds, which smashed the old record of 11.9 seconds. After this came the girls 200m - Charlotte Atherton in 9S came running in way ahead of all the other competitors. She said she felt, “absolutely knackered” after the race. In the boys 200m, Max McMurtry in 9O won, gaining even more points for Owen. The next race was the girls 300m, which was a photo finish; Olivia Worthington, 9W won, followed closely by Isabella Earley in 9S. As the afternoon was coming to a close, the last event was the boys 400m, which was won by Dan Hill in 9W who lead for the entire race. I must give a special mention to Matthew Haynes 9O, who throughout the afternoon was raising morale by dancing at the side of the track whilst watching the events. Sun shining. Students competing. Everyone cheering. Of course I’m talking about sports day. It was a brilliant day full of laughter, largely due to Mr Killen’s hilarious commentary. You should have seen the faces on some of the Year 7s as he said, “Mr Morgan hasn’t killed or even critically injured a student with the starting pistol for years so we should be safe.” was priceless! Everyone ran as fast as they could, making their forms, years and houses proud, especially the Year 10s as they competed for the last time.

To start, the first race was the mixed relay. We had 10G as the winners by far, a true team effort! The first contestants line up for the 800m boys race, won by Jack Burke in 10S. When asked for a quote in his final sports day he replied, “I’m knackered”, quite fitting due to the effort he put in to win. There was no 800m girls race however, so the next race was the 100m girls race. It was neck-and-neck from start to finish, the last few seconds having everyone on the edge of their seats. As they crossed the finish line they had to have loads of teachers deciding who the winner was, eventually deciding that Molly Bibby, 10O was the victor. She told us “This is my last sports day, I was doing it for a laugh, but I won so … great”. Truly inspiring! Next was the girls 200m - at the start it looked to be a very close call, however in the last five seconds or so, Elizabeth Davies of 10M ran ahead, securing first place. Second place was Alicia Burgess, who stated “Thank goodness it’s my last time doing that”; how I am sure a lot of the Year 10s felt on this sunny yet muggy day. While everyone was having a great time, Mr Killen enjoyed having control of the music which was playing - some of his songs included ‘Running’, 'Get Lucky' and even some Heavy Metal!

Next up was the girls 300m, once again won by Elizabeth Davies with a time of 53.27 seconds - what a brilliant last sports day for her! The boys 400m came soon after, with Liam Grey, 10H claiming the title, which was quickly followed by the girls relay, completed in 1 minute 1 second by 10W - very impressive. The boys relay was won in only 50.57 seconds, just one second slower than the school record which we am sure they are very proud of.

We also decided to ask some of the staff the question “If you were a competitor today, what race would you compete in?” We had some more serious answers, such as Mr Griffin who said, “I didn’t really like running so I would definitely take part in discus”. He also told us that "I would be happiest doing cross country", mentioning that he participated as a student when he was younger. However some of the answers where slightly different, such as Mrs Evans who said “the wheelbarrow race” and Mr Webster who said “I love the egg and spoon race”. When speaking to other teachers, many opted for the 100m race, including Mrs Morgan and Mr Doyle, but we are sure that if there ever was a staff race of the wheelbarrow or egg and spoon race, then Mrs Evans and Mr Webster would definitely be our first choice competitors!

Mr Griffin, who after retiring last year to Yorkshire, came all the way here to watch the sports day was hard not to notice in his fashionable getup. His straw hat and striped blue t-shirt made us think he had come straight from Italy and a gondola and his jeans had us reminiscing the 80’s.  His words left us motivated as he said, “I always loved sports day as a child and, as a PE teacher, it was always my favourite day of the year.”

Overall, the year 10s did extremely well, but did not manage to beat any records - better luck next time! It was a brilliant day that will go down in history, with many school records being broken in the other year groups. The spirits where high and we think we can speak for the whole student body when we say that it was a fantastic day that everyone will look back on for years to come.